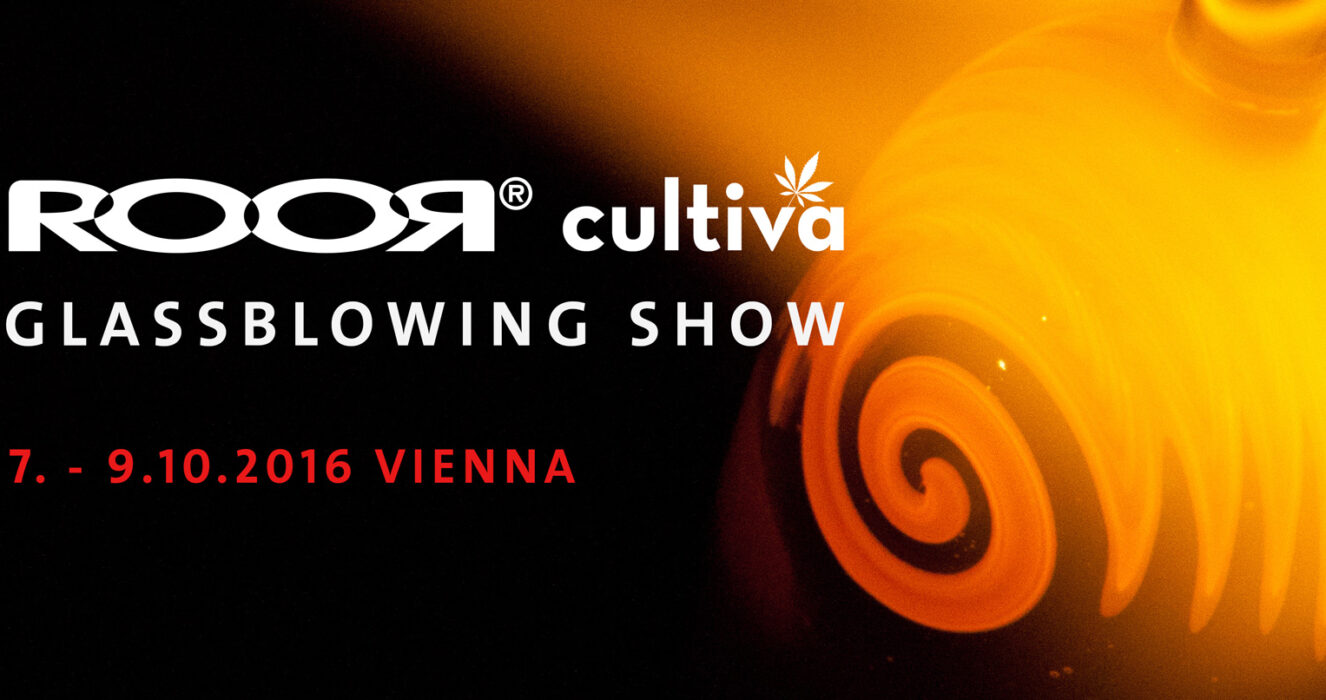 On the Cultiva 2016 from 7-9 October history will be written in Vienna! The new ROOR team, consisting of Adam Whobrey (aka Hoobs), Matt Robertson and Nathan Purcell (aka JAG), represents another milestone in ROOR collabs: At the glassblowing show at the Austrian Hemp Fair the internationally known glassblowers will produce an unbelievably elaborate and unique artifact. Decades of know-how, boundless creativity, perfect teamwork - be there live in Vienna when ROOR shows you what these three are capable of.

Also this year - as already in 2015, when the RAINBOW MACHINE ELF was created - ROOR-Collab can rely on the support of The Arnold Group which provides three of the legendary Herbies.

Of course we accompany the event here on roor.de, at Facebook or Instagram. More information about the Cultiva and the ticket presale you can find on www.cultiva.at.

ROOR proudly presents: the team of the Cultiva-Collab 2016

Hoobs (Adam Whobrey) has acquired the art of glassblowing on his own. Since 2002 he has been working in this field. He grew up in Southern California. He currently lives in Huntington Beach. There he is co-owner of the GooseFire Glass Centera unique studio and exhibition space for glass art and artists.

Hoobs loves to bring both real life motifs and fantasy objects to life in his glass art.

The Work of Hoobs:

Canadian Matt Robertson spent many years working in other artistic fields before attending Sheridan College in Oakville, Ontario in 2003 and learning the art of glassblowing. He was instructed by international glassblowers in special techniques of glassblowing, both soft glass and hard glass (borosilicate). Since his graduation he has been a glassblower with heart and soul.

He currently lives in Evergreen Colorado. The goal of his work is to create art objects that people enjoy and make them laugh.

The Work of Matt Robertson:

Collab between Matt and Hoobs

Matt and Hoobs have already worked as a team. Here are photos of their last collab.

Nathan Purcell aka JAG has been a glassblower since 1998, and developed his signature style during his time in his hometown of Philadelphia. After founding Philadelphia Glassworks, JAG was also a partner in the high-end glass pipe gallery Easy Street Brooklyn and co-editor of Smoked Volume 1 and 2.

His interest in special design became even greater after a stay in Europe in 2013. After his return to the States, his aesthetics also influenced works of art in other areas - in collabs and street art installations.

In 2014 he opened his second art-glass-gallery "JustAnotherGallery" in downtown San Diego, where he currently lives and works.

The work of JAG:

As at Cultiva 2015, we welcome Stefan Kollar, who will occasionally support our Collab team as a guest. We are happy that he will be there again this year. You can find more about him on Instagram: @stefan_collar

We use cookies 🍪
We use cookies for a proper display and function of our website. These are not viruses. They only help us to optimize the user experience and our offer. You can find more information about the use of cookies in our
Manage options Manage services Manage vendors Read more about these purposes
Settings
{title} {title} {title}
Create An Account